ALL INDIA BSNL DOT PENSIONERS ASSOCIATION
[[Regiistterred No.. S//68836//2010]]
Centtrall Head Quartters
D--7,, Tellegrraph Pllace,, Golle Marrkett,, New Dellhii – 110 001
Adviisor :: V..A..N.. Namboodiirii Presiidentt:: Anantta Kr.. Bhattttacharjjee
Pattron :: P..V.. Chandrasekharan Generall Secrettary:: K..G..Jayarajj
011 – 23343388,, 09447455633
AIBDPA/DOT-MIN/2014 June 14, 2014
To
Shri Ravi Shankar Prasad,
Hon’ble Minister for Communications & IT,
Government of India
Sanchar Bhawan,
New Delhi – 110 001
Respected Siir,,
Sub: - Extension of 78.2% IDA merger to the BSNL pensioners – Unwarranted delay and unhelpful approach of DoT - reg.
We are really constrained to bring your kind attention a burning issue of the BSNL Pensioners for early intervention and redressal.
BSNL employees were granted the benefit of merger of 50% IDA with basic pay with effect from 01.01.2007, effectively amounting to 78.2% for the purpose of fitment and pay fixation vide DOT order 64-04/2012-SU dated 10.06.2013.
It was mentioned that no arrears will be paid and the fixation will be made notionally w.e.f. 01.01.2007 with actual payment prospectively from 10.06.2013.
Since then, we have been pursuing with all the officers in DOT including the Secretary, DOT to cause necessary action to extend this benefit to the BSNL pensioners, retired before 10.06.2013. Inspite of our strenuous and repeated efforts, the issue was not being dealt by the DOT Officers seriously and the clarifications sought by the Department of Expenditure ha snot been furnished even after three months. Now, after much pressure the DOT is reported to have finalized the reply to the Department of Expenditure, much to the disadvantage of the BSNL pensioners on the following points.
(1) No arrears to the pensioners. BSNL Pensioners are eligible to get arrears from 01.01.2007 on fixation at 78.2%, as there is no provision in the FRto fix the pension notionally. Further, BSNL employees were not given the arrears due to financial constrains of BSNL. This position is not applicable to the BSNL pensioners since the pensionary benefits are paid from the consolidated fund of Government of India by virtue of Rule 37 A of CCS (Pension) Rules 1972.
(2) Cabinet approval required for the pre 2007 BSNL retirees.Cabinet approval was obtained for the 78.2% IDA merger. Further when 68.8% was granted to the pre 2007 BSNLpensioners, formal approval of cabinet was also obtained. Extension of benefit of 78.2% being continuation of thesame, no fresh cabinet approval is required. Most of the DoT officers during our discussion had shared the sameview. The Department of Expenditure, according to our information, has the same opinion. But contrary to our
expectation DoT has finally decided to seek cabinet approval which means further delay.
Sir, one year has elapsed after this benefit was given to the BSNL employees and the unwarranted delay in extending it to the pensioners is causing much pain and resentment among the pensioners. Therefore we request your interventionin the matter for early favourable settlement. We shall be much obliged, if you kindly grant us a personal hearing in this regard.
Thanking you,
Yours faiithfulllly
[K.G. Jayaraj]
General Secretary
Copy to: Shri M.F. Farooqui, Secretary, DoT, Sanchar Bhawan, New Delhi- 110 001
Posted by Unknown at 21:43 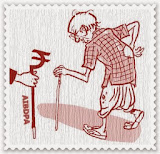